Sr. Dorothy Stang chose to live in extreme poverty in order to help others living in poverty. She had a passion for people of all cultures, for social justice, peacemaking, fairness, and respect for the environment. She possessed few material things: a mix-match of colorful clothing, spartan furnishings and her Bible, which she carried everywhere and sometimes called it her “weapon.”

On a rain-soaked Saturday in February 2005, she carried that Bible while making her way along a muddy Amazon jungle road. She was headed to Boa Esperança, a village near Anapu, where she lived in the northern Brazil state of Para. The area lies on the eastern edge of the Amazon, a region known for its wealth of natural resources and the violence that boils over from land disputes.

Waiting for Sr. Dorothy that morning was a group of peasant farmers whose homes had been burned down to the ground on the land which the federal government had granted to these farmers. In the entire state of Para and in a place like Boa Esperança, legal title to land does not always end disputes. In Para, logging firms and wealthy ranchers find assistance from local politicians and police in procuring and commandeering property from indigenous peoples and small farmers. While Sr. Dorothy walked on toward Boa Esperança, she heard taunts from men who had stopped alongside her. The rain poured as she stopped and opened her Bible. She read to the men. They listened to two verses, stepped back and aimed their guns. Sr. Dorothy raised her Bible toward them and six shots were fired at point blank range. She fell to the ground, martyred. 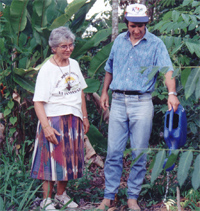 In the days preceding her murder on February 12, 2005, Sr. Dorothy was attempting to halt illegal logging where land sharks had interests but no legal rights. Authorities believe the murder was arranged by a local rancher for $19,300 (U.S.). Many believe that a consortium of loggers and ranchers had contributed to the bounty on Sr. Dorothy’s head in an effort to silence her. Ironically, their attempt at silence resulted in an opposite effect: an outraged world, well informed about the murder through persistent global media reports, sent Sr. Dorothy’s voice soaring to new heights. And a proclamation came quickly from Brazil’s President Luis Inacio “Lula” da Silva, that the land in question, over 22,000 acres, would be reserved for sustainable development by the poor farmers whose cause Sr. Dorothy had championed.

Following her death, Brazil’s Human Rights Minister, Nilmario Miranda, described her as “a legend, a person considered a symbol of the fight for human rights in Para.” While this accolade has become global consensus, Sisters who knew the down-to-earth Sr. Dorothy state that she would have cringed at being called a legend. Having spoken with Sr. Dorothy days before her death about threats against herself and others, Mr.Miranda says: “She always asked for protection for others, never for herself.”

Her Sisters, family, friends and colleagues gathering around tables, at prayer services and in classrooms around the world, try to understand the pattern of fact and circumstances that led to Sr. Dorothy’s death. Many are curious to know more about her ministry and what brought her to Brazil in the first place.

Like most Sisters of Notre Dame de Namur, Dorothy Stang chose life in this Congregation which has a clear preference for work among those living in poverty. At age 18, she completed her application to join the Sisters and wrote boldly across the top of the form: “I would like to volunteer for the Chinese missions.” She never served in China, but her dream of missionary work was realized in Brazil.

Sr. Dorothy lived and worked in Brazil for nearly 40 years. She went there for the first time in 1966 with five other Sisters of Notre Dame. At that time, Sr. Dorothy and her Sisters spoke little or no Portuguese. So they began the ministry with language learning. Soon they established a new convent at Coroatá in the state of Maranhão, where they trained lay catechists and gave religious instruction to adults. Over time, the Sisters became more aware of the social problems troubling this region, particularly the oppression of farmers. The Sisters reacted by stressing basic tenets of human rights in their lessons and their work took on new proportions and expanded to new areas in Brazil.

Sr. Barbara English was among the group who traveled to Brazil with Sr. Dorothy. She remembers: “By 1968, all of us (SNDs) in Brazil were aware of the repression and violence promoted by the military dictatorship. People who worked for human rights and for the small farmers’ rights to the land were labeled subversive and the military dictatorship had them hunted down.”

In the early 1970s, Brazil’s government touted the benefits for impoverished people to move to the Transamazonian region. Landless people saw this as an opportunity to become farming homesteaders. Many moved to the state of Para to begin new lives for their families. This sparked in Sr. Dorothy something that would have attracted many Sisters of Notre Dame — the chance to help people create better lives for themselves. She packed up and joined the farmers on their journey to the new frontier but once there, they all realized that the poverty and insecurity they had left behind had been replaced by new problems: land sharks, intent on occupying the soil they had come to till, were taking over. Officials in Para offered no remedy since many police and politicians were well paid to scare off the homesteaders.

The farmers who had traveled to the region on the advice of the Brazilian government found their dreams of independence and security for their families not only elusive but dangerous. So they moved even deeper into the forest, and Sr. Dorothy moved with them. Still, the situation was the same after each migration and, according to Sr. Barbara, it became obvious by 1980 that the government had other plans for the region.

The Great Carajás Project designated 10.5 million acres in northern Brazil for development encompassing three states, including Para. Sr. Barbara recalls: “This sector of Brazil held every imaginable mineral deposit along with potential highways, railways and waterways for transportation, as well as potential dams for energy.” The plan was to open the land for mining, refining and agribusiness projects.

“They were David facing Goliath,” said Sr. Barbara, of Sr. Dorothy and the peasant farmers, “and Goliath came in the form of multinationals, big businesses, ranching and lumber companies ... They began to devour the Amazon forest.” (Environmentalists estimate that the Amazon loses 9,170 square miles of forest every year and that about 20% of its 1.6 million square miles has already been cut down to make cattle pasture or to log cedar, mahogany and other precious hardwoods.)

Sr. Dorothy and “her people” moved still further into the forest. Her dream of landless families safely engaged in sustainable development projects brought her ultimately to Anapu, Para in 1982. There, she worked to develop a new type of agrarian society that helped farm families from diverse cultures develop common bonds and learn how to use the soil to sustain themselves and the land. With Sr. Dorothy’s help, the communities in Anapu lived in solidarity and with respect for the environment. During these years, she worked with the Pastoral Land Commission, an agency of the Bishops’ Conference in Brazil. She also helped to foster small family business projects in the village, often creating, for the first time in many families, women breadwinners.

“She helped train agricultural technicians and worked hard to create a fruit factory,” said Betsy Flynn, SND, a Sister of Notre Dame whose ministry has also brought her to Brazil. Sr. Betsy remembers Sr. Dorothy as a person supporting the community she helped build through education and health care. “She worked to create schools and helped teachers become properly trained and credentialed,” said Sr. Betsy. “Many people learned to read and write because of Sr. Dorothy Stang. She also had a vast knowledge of popular health care remedies, particularly useful in areas where doctors and hospitals are scarce, and medication costs are often exorbitant.”

In the last year of her life, Sr. Dorothy was granted naturalized citizenship in Brazil. She received a humanitarian award from a Brazilian lawyers’ association and officials in the state of Para named her “Woman of the Year.” Both honors were given for her work to secure land rights for peasants but while she was given the award from the officials in Para, a plan was underway for a paved highway through the area, raising land values higher and escalating the violence.

At the federal level, President da Silva is caught between a promise to find homes for 400,000 landless families, an expressed desire to protect the rainforest and the pressure to open tracts of forest to support economic growth. External pressure comes from the International Monetary Fund, which loaned Brazil billions of dollars after its 2002 recession. It is a dangerous and complicated life for many in Brazil, but for none more than the people in Para. The Pastoral Land Commission reported recently that the state of Para has been the site of 40% of the 1,237 land-conflict killings in Brazil over the past 30 years. The many concerns surrounding the climate of corruption in Para have increased efforts to move the investigation into Sr. Dorothy’s murder from the state to the federal government. It is widely believed that a fair trial cannot be achieved in Para.

Mary Alice McCabe, SND, who defends the rights of families relying on the fishing trade in Ceara, Brazil, says of Sr. Dorothy: “She was with the excluded migrant farmers in their constant, futile search for a piece of land to call their own. She persistently pressured the government to do its job in defending the rights of the people. She never gave up. She never lost hope.”

Several thousand people attended Sr. Dorothy's funeral. In the month following her murder, four men were arrested and charged with the murder. President da Silva sent 2,000 troops to the area to quell violence, while the United States sent FBI agents to Anapu to investigate the killing. Memorial services were conducted around the world and the Brazilian Ambassador to the United States spoke at a Memorial Mass for Sr. Dorothy in Baltimore. On March 9, 2005, U.S. Congress Resolution #89 was introduced, honoring the life of Sr. Dorothy Stang. On December 10, 2008, Sr. Dorothy Stang was awarded the 2008 United Nations Award in the Field of Human Rights.

She is buried in a grove in Anapu, her grave marked with a simple wooden cross bearing her name and dates of birth and death.